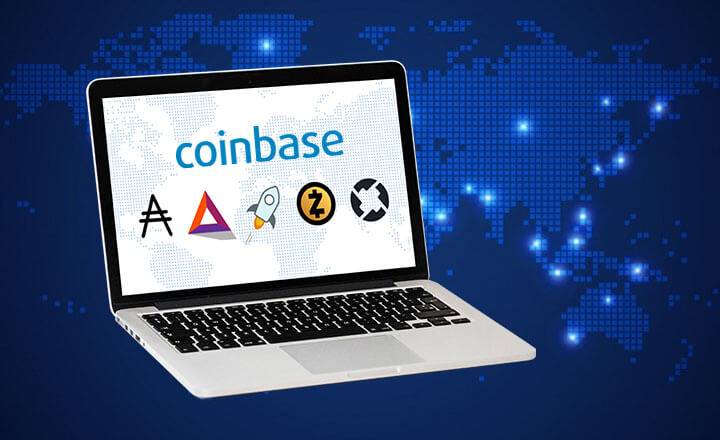 Cryptocurrency exchange Coinbase has announced that it is looking into adding Cardano, BAT, Lumens, Zcash, and 0x to its platform in the future.

Cryptocurrency exchange platform Coinbase—the most popular in the United States—is looking into adding five more virtual currencies to its list of tradable assets.

However, Coinbase does not guarantee that it will support the five prospective cryptos in the future. The exchange said that it is currently studying the feasibility of trading the five coins, considering the legal hurdles in several jurisdictions where Coinbase offers its services. Still, the exchange shared that it has already started conducting engineering work just in case it would eventually adopt these coins.

“In an effort to be as open and transparent as possible, we’re announcing that our teams are exploring the feasibility of supporting these assets. This is consistent with our process for adding new assets. But unlike Ethereum Classic, which is technically very similar to Ethereum, these assets will require additional exploratory work that may result in one or more of them being listed only in specific jurisdictions, or not at all.”

The statement came after Coinbase has announced earlier the addition of Ethereum Classic (ETC), a split from the more popular cryptocurrency Ethereum. Crypto enthusiasts can expect more updates on the five aspiring digital coins, and other potential additions, through Coinbase’s social media channels.

There is a huge reward in being listed—or considered to be listed—by Coinbase as many believe the exchange is the most sought-after in the North American region.

One of the biggest payoffs is the sudden increase in prices, as recently evidenced by Ethereum Classic. Just an hour after Coinbase announced the inclusion of Ethereum’s hard fork, Ethereum Classic’s price jumped by around 23 percent from US$13 to US$16.

The five prospective coins increased in price as well even if they are not yet assured of a place in Coinbase’s platform. Just one hour after the announcement, price graphs of these coins recorded a sharp upward turn.

The recent announcement is bad news to Ripple (XRP) holders, who have continuously pushed for the inclusion of the digital currency into Coinbase’s list of tradable cryptos.

Ripple Labs’ CEO Brad Garlinghouse said that the exchange should add support for XRP, which is currently the third largest crypto with a market cap of more than US$18 million.

Garlinghouse, in an interview at CB Insight’s Future of Fintech, said:

“As we solve problems at scale for institutions, I think it’s in the Coinbase’s interests to participate in that.”

Furthermore, reports have emerged, claiming that Ripple tried to buy its way into Coinbase. Bloomberg reported that the company offered financial incentives to the exchange for it to trade XRP.

Coinbase, though, still refused to list XRP. According to the trading platform, it will not accept tokens considered as securities based on Coinbase’s Securities Law Framework and on the mandate by US’ Securities and Exchange Commission (SEC).

It is worth noting that trading platforms listing securities would be required to register and to comply with the rules set by SEC. A lawyer explained that if the Commission sees XRP as an unregistered security, the crypto coin and the exchanges trading it would face penalties as a consequence.

The crypto community, however, should not think that Coinbase considers the five aspiring coins as securities after the trading platform’s announcement. The exchange shared that it is still conducting legal analyses for each coin and jurisdiction, and it is unclear whether the five cryptos will pass Coinbase’s own securities framework.