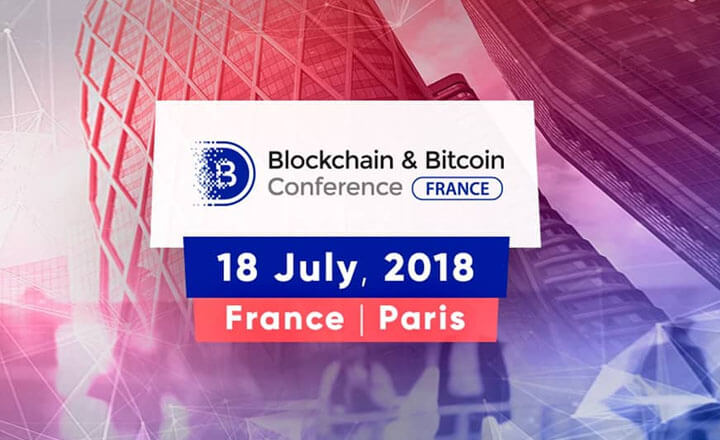 Paris will host the Blockchain & Bitcoin Conference Paris this July 18, where experts and players can discuss recent developments in the blockchain scene.

On July 18, experts in the fields of cryptocurrencies, blockchain technology, and initial coin offerings (ICOs) will gather in Paris for the Blockchain & Bitcoin Conference France, arranged by Smile-Expo—organizer of the Blockchain World Series Events.

Guests will have the chance to meet and socialize with different players on the blockchain market in the event’s demo zone. Different companies in the industry will exhibit their newest projects and developments involving blockchains. Attendees will also be given enough networking time to seek and lock down business contracts and partnerships.

Apart from conducting a demo zone, the conference will hold talks from 12 experts in the fintech industry and beyond.

Marc Durand, a blockchain leader at IBM Cloud France, will give a presentation named Industrial blockchain projects with Hyperledger Fabric: Feedbacks and Perspectives.

Stefano Tempesta, regional director at Microsoft, will present Blockchain for Enterprise, in which he will discuss cybersecurity and smart contracts. He will also share real-life cases of blockchain incorporation into business operations.

Meanwhile, Laurent Leloup—founder and CEO of Chaineum—will head the discussion titled The new use cases of blockchain for industrials and governments. He will also talk about the trends and opportunities of blockchain utilization.

The French government wants its country to take the leading role in the European fintech industry, according to Finance Minister Bruno Le Maire. In fact, the government already took the steps to achieve that goal.

In March 2018, the French Autorité des marchés financiers (Financial Markets Regulator) announced its plans to introduce a legislative framework that would allow ICOs to be accepted as legal means of investing. A month later, the Conseil d’État (Council of State) proposed to bring down crypto operations taxes from 45 percent to 19 percent and to count crypto capital growth as equal to non-fixed assets.

Meanwhile, the French Parliament has discussed the ins and outs of distributed ledger technology. Large French banks—including BNP Paribas, RCI Bank, and Société Générale—have and will introduce blockchain to financial services they offer. In addition, the Banque de France (Bank of France) is already providing assistance to startup projects based on decentralized technology.

French crypto enthusiasts hope that through the government’s efforts and events like this conference, the local crypto community will continue to grow larger.