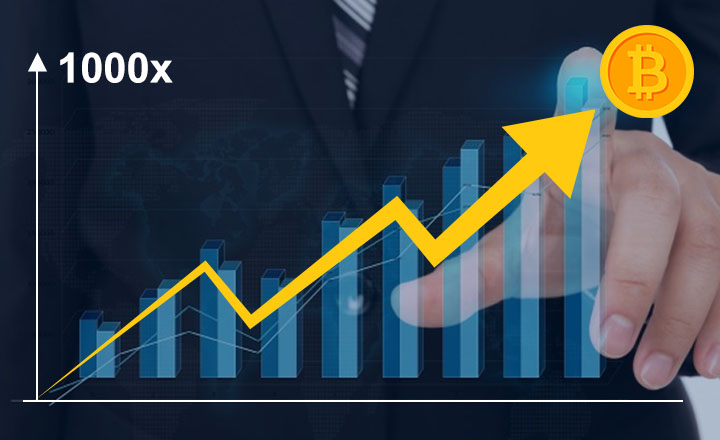 The crypto community has differing opinions on Vitalik Buterin's statement claiming that digital currencies would never achieve a 1000x increase in prices.

Another point of discussion has captured the minds of the cryptocurrency community: Will the prices of digital currencies increase by a thousand times?

The question floated around the internet after programmer and Ethereum (ETH) co-founder Vitalik Buterin stated earlier this week that cryptos are closely approaching their ceiling.

“The blockchain space is getting to the point where there’s a ceiling in sight. If you talk to the average educated person at this point, they probably have heard of blockchain at least once. There isn’t an opportunity for yet another 1,000-times growth in anything in the space anymore.”

The statement caused a huge uproar online, with crypto community members either siding or disagreeing with Buterin.

Buterin later doubled down on his earlier statement. The Russian-Canadian said that he was just being realistic regarding the future of cryptos.

The Bitcoin Magazine CEO explained that a 1000x increase in crypto prices would equate a total close to US$200 trillion in digital currencies. In fact, a sudden increase in that magnitude would make cryptos represent around 70 percent of the reported global wealth today. Financial services company Credit Suisse recorded a global wealth of US$280 trillion in 2017.

However, Buterin clarified that his statement referred to ceiling on crypto prices, not on the growth and development in the industry. He added that the industry has the room to grow further, but only through improving the utility of the coins.

Meanwhile, TRON (TRX) founder Justin Sun believed that cryptos could reach the trillion-dollar mark. In a tweet replying to Buterin, Sun shared his belief that the total crypto market cap would reach US$10 trillion before established North American companies Apple and Amazon.

I do believe the entire world wealth will turn into cryptocurrencies like blackhole and grow much bigger in the future. Cryptocurrency will hit 10 trillion USD market cap before @Apple and @amazon do. We will see. Time will tell. #TRON #TRX $TRX

Apple’s market cap just reached US$1.068 trillion while Amazon’s total value followed close at US$970 billion. All digital currencies combined, however, still fail in comparison with these companies.

The number of cryptos circulating on the market peaked at just US$795 billion nine months ago. Even now, the industry’s market cap amounts to only US$194 billion.

At the same time, Binance’s founder and CEO Changpeng Zhao has flat out disagreed with Buterin. The Chinese-Canadian executive even wrote that “crypto will absolutely grow 1000x and more.”

Zhao also implied that, given time, cryptos could overtake the more-restricting US dollar in terms of market cap. The current amount of US dollars circulation is approximately US$1.67 trillion, according to the country’s Federal Reserve.

I still disagree with this. I will say "crypto will absolutely grow 1000x and more!" Just reaching USD market cap will give it close to 1000x, (that's just one currency with severely restricted use case), and the derivatives market is so much bigger. https://t.co/bvSttEeCmc

He added that Buterin could not use global wealth as a measure of the potential cryptos have. Zhao cited how using the taxi market to calculate the potential of ride-hailing service Uber would result in inaccurate analyses.

However, Zhao agreed with Buterin that the crypto and blockchain industries would grow as utility improves. He went on to say that more blockchains with practical use cases would appear in the years to come.