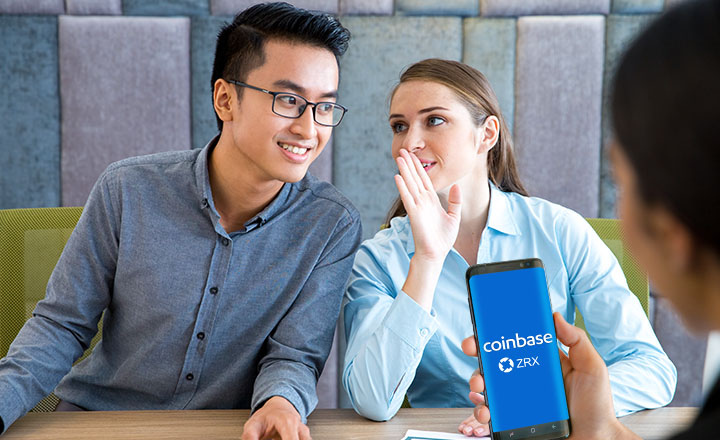 The price of 0x (ZRX) has increased on October 7 after the digital asset appeared on one of crypto exchange platform Coinbase’s interfaces.

Images that have spread online showed that Coinbase’s tax calculator included ZRX as one of the crypto options available. The 0x protocol, which lets holders use ZRX, “facilitates low friction peer-to-peer exchange of ERC20 tokens on the Ethereum blockchain.”

I can 100% verify that their is a $ZRX wallet on @coinbase! Go to “Tools” then click “Tax Center” then download the 2017 report next to the “Gain/Loss Calculator” #Cryptocurrency #Coinbase #ZRX pic.twitter.com/lFywktu13V

A number of online enthusiasts took this inclusion as a sign that Coinbase is close to integrating the crypto into its platform. Months earlier, Coinbase hinted that they have started examining ZRX—together with four other cryptos—for potential listing into the exchange.

As the leaked screenshots circulated social media and forums, ZRX saw a significant positive movement in its price. Late Sunday, ZRX went from trading at US$0.703877 against the US dollar to US$0.776771, which is more than a 10 percent increase in just an hour.

At the same time, the trading volume of ZRX went up. From just US$10.4 million on October 7, the volume climbed to US$38.343 million half a day later.

$ZRX having a nice break to the upside, as coinbase rumours increase. Quick snap up to our resistance at $0.80 and then small pullback as some take profits, $0.85 is a very possible target and buying pressure continues. MACD + RSI ticking upwards and RSI soon into overbought. pic.twitter.com/clEHkIqWFJ

Many crypto observers attributed the sudden increase of ZRX’s price to what is dubbed as the “Coinbase Effect.” This outcome usually appears as a sudden price rally of a coin after an official confirmation from Coinbase—or even just rumors—states that the crypto will be listed by the exchange.

Analysts explained that the Coinbase Effect exists because of the platform’s thorough examination of a digital currency before listing. In a way, they said, passing Coinbase’s inspection would be similar to the exchange giving a vote of confidence to the crypto.

Some famous rallies credited to the Coinbase Effect include Litecoin’s (LTC) 98 percent jump inside six weeks back in May 2017, as well as a 30 percent increase for Ethereum Classic (ETC) in 2018, among others.

As of October 8, ZRX kept the gains it acquired from the supposed Coinbase Effect. The crypto was trading at US$0.77385299 against the US dollar. Meanwhile, ZRX is available for trade at exchanges such as Binance, Upcoin, Upbit, and Bittrex.

However, Coinbase has not yet made an announcement about listing the coin for trading.