10 Significant World Events That Happened The Last Time Bitcoin (BTC) Was Trading Below $4,000 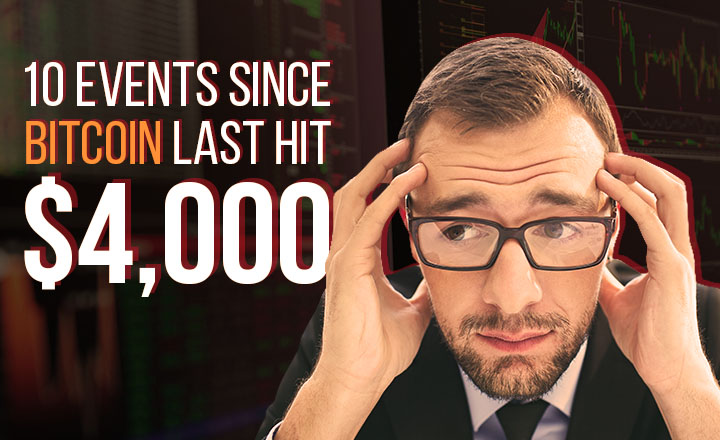 Bitcoin has crashed to below US$4,000 for the first time in 15 years. Here are 10 things that took place between now and the last time BTC was as low.

Earlier, the cryptocurrency crash continued as Bitcoin (BTC) prices plummeted to below US$4,000 for the first time in more than a year. The last time the first and biggest cryptocurrency on the market was below that level was on September 27, 2017, almost exactly 14 months before.

Here are the ten things that have occurred on Earth, from the crypto sphere and beyond, during that period.

1| Record Price for Any Work of Art Smashed

On November 15, 2017, Leonardo da Vinci’s Salvator Mundi, a painting depicting Christianity’s Jesus Christ, was sold for US$450 million at the Christie’s auction house.

The 93-year-old President Robert Mugabe, leader of Zimbabwe for almost 37 years, resigned from his post on November 21, 2017 after 37 years ruling the African country.

Is “‘Oumuamua,” the first interstellar object detected passing through our solar system, a sign of alien life? https://t.co/6Jq9m3lIAw

Almost all cryptos and digital tokens reached their peak prices around late December to early January next year. Bitcoin breached US$20,000 briefly on December 17.

France lifted the greatest prize in football for only the second time after beating Croatia 4-2 at the 2018 FIFA World Cup Final on July 15.

The government of crisis-stricken Venezuela announced on late October that its Petro crypto was for sale to locals through trade of either crypto or fiat currency.

The current status of Bitcoin Cash is fairly clear, but it isn't sustainable. It's split into two separate things, both of which have comparable hash rate to what the whole thing had previously, because 'the miners decide' and they think this dick-measuring contest matters /1 pic.twitter.com/TI1a0Wzx7B