Cryptocurrencies have continued to drop in valuation amid reports about governments around the world, most notably the EU, move for crypto regulations.

The bears have triumphed over the bulls this week, as the top 10 cryptocurrencies continue their steady drop. The movement coincides with news reports that governments are moving to regulate the crypto markets. Know what affected the digital coins’ poor performance in this Crypto Exchange May WK3 2018 roundup.

The week started bright for cryptocurrencies as the annual blockchain summit Consensus 2018 brought hype to the market. Participants and speakers discussed blockchain technology, and in passing, the virtual coins using them. The interest Consensus brought to the public allowed the coins to slightly rebound from another poor showing last week.

But as the days passed by, the hype fizzled out and was replaced by uncertainty as several news reports indicated governments have moved to regulate cryptocurrencies. The European Union has just ordered that, 11 months from now, crypto exchanges and wallets operating inside their jurisdiction must document and validate the identity of their users.

US regulators have spoken about their desire in policing the crypto markets to weed out fraudulent persons. Russia is a step closer to crypto regulation as a Putin-backed initiative moves forward in its State Duma.

The cryptos were hit by more punches as Bing, Microsoft’s search engine, will prohibit deceptive cryptocurrency-related advertisements to appear on its website later this June. This ban is similar to restrictions made earlier by Google and Facebook. 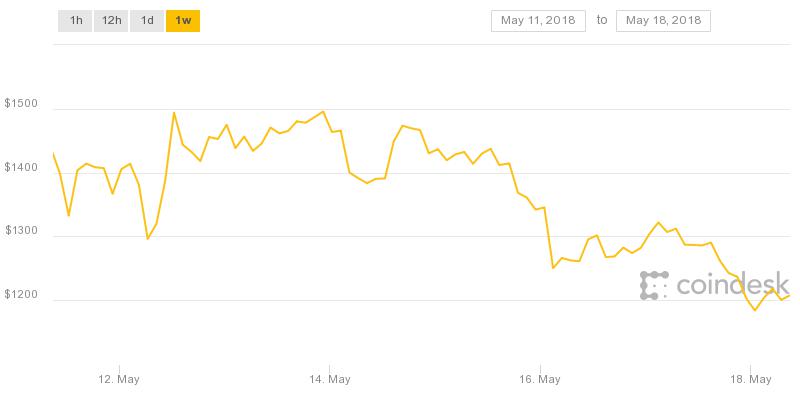 The biggest casualty this week is Bitcoin Cash (BCH), which lost a staggering 15.75 percent of its total value. The coin just completed an upgrade last May 15, in the hopes of attracting more customers to transact using Bitcoin Cash with its larger maximum block size and faster transaction speed. But the downward graphs suggest that investors were not impressed with the upgrade. Analysts theorized that the upgrade was made in anticipation of institutions entering the market to conduct larger transactions in the future.

The best performer this week is altcoin TRON (TRX), which only lost 7.38 percent of their value. At the end of the month, TRON will move away from the Ethereum (ETH) blockchain and migrate onto its own TRON MainNet. Graphs suggest that investors were not impressed with the upcoming launch. But TRON holders are hoping that as more details about the MainNet surface in the coming days, interest in the altcoin will increase.

Bitcoin (BTC) fell below the US$8,000 mark, just weeks after failing to break through the US$10,000 mark. Bitcoin lost 8.24 percent of its value and dropped to as low as US$7,998.84, nowhere near its prime price of around US$19,000. Still the largest coin in market capitalization, Bitcoin endured criticisms regarding its slower network and high transaction fees. Analysts from one side interpreted the drop as just a price correction; the other side called it the bubble finally popping.