Explore the price swings in crypto markets this week and discover if it would be wise to hold on to cryptos like Bitcoin, Ethereum, and Bitcoin Cash.

We all know that the crypto markets have been very volatile this year. Prices were at record highs around the turn of the new year but have since been at the lowest point they have for many months, before somewhat recovering recently. 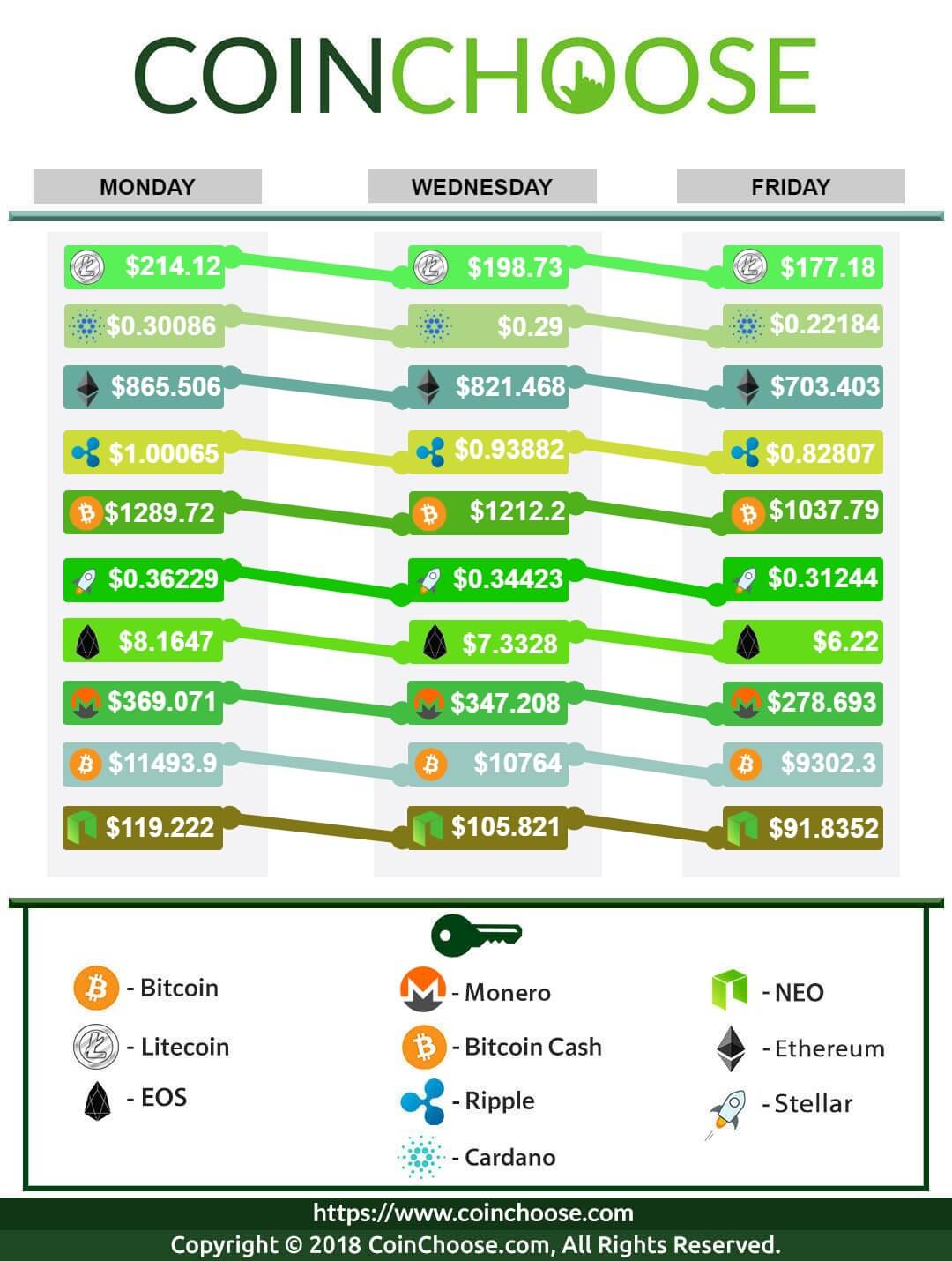 Most of the price swings in crypto markets account for cross-cryptocurrency effects, such as regulation or market conditions. But, there is also a lot more to each cryptocurrency than overall prices. Here, we take a closer look at some coins to see what else is going on, evaluate adoption and talk about what is to come.`

Bitcoin fees are now back at an average of $3 per transaction, down from a high at end of December of more than $25. This in fact is the lowest fee in 18 months.

Fees and speed of transaction were the reason why Bitcoin Cash was created – to make Bitcoin a feasible and affordable method of payment.

Some Bitcoin commentators say that Segregated Witness, a way to scale processing power so that fees are lower and transactions are processed faster, has helped. But SegWit has not been widely adopted and only accounts for less than 15 percent of all Bitcoin transactions.

Perhaps it is simply that those who previously transacted with Bitcoin have switched to alternative cryptocurrencies where high fees have not been an issue.

In the near future, the Bitcoin protocol hopes to add the Lightning Network payment protocol, which allows instant transactions between participating nodes. For many, this is to solve the scalability debate, as settlement times are expected in milliseconds and fees are expected to be much lower than the current $3.

Such a move may lure back many of the apparent Bitcoin deserters, and we will not have to wait long to find out. As of Jan. 18, 2018, 60 nodes were in the “testnet” phase for Lightning implementation.

Bitcoin, however, is still the undisputed king in numbers of transactions overall and still has the overall number one coin market capitalization. So there is an ardent user base that is not deterred regardless of the ongoing matters.

Ethereum right now is embroiled in a serious ethical dilemma—essentially what stance to take on lost funds due to hacks and errors. The debate arose when Ethereum Improvement Protocol 867 was proposed to the Ethereum community.

EIP 867 is only a proposal for discussion on whether to introduce a framework on how to deal with lost funds (or not). Ethereum has suffered a number of large fund losses in the last few years. Most embarrassingly, a highly prominent Ethereum development company—Parity Technologies—accidently let a user permanently lock away $300 million worth of ether that belonged to their other users.

The debate centers on the fact that we know how much funds have been lost and who they belong too, so why do not we just credit the funds back. But while some users think it is acceptable to return the lost funds, others believe that principles of the Ethereum platform, “code is law”, are at stake.

There is no immediate threat of further forks, but we have seen dangerous precedent in the past. Following the DAO hack in 2016, where 3.5 million ether were lost, the Ethereum blockchain split into two. The new chain re-credited users’ lost funds and is the one now known as Ethereum (as opposed to Ethereum Classic)

Ethereum transaction fees have also dropped, in a similar trend to Bitcoin. Ether-based transactions are down 25 percent from a high of 1.25 million per day back in early January. This and what we have seen in Bitcoin might just be an indication of a bigger trend in cryptocurrency—namely that the hype cycle has calmed down. This is supported by the fact that new unique wallet address growth has also slowed.

This year, however, Ethereum’s usage is widely predicted to grow, as more smart contracts and decentralized applications are developed. It seems Ethereum’s politics may not overshadow its attraction for its effective uses, but it will certainly be an interesting year.

Bitcoin’s primary offshoot has been having a mixed start to the year. After reaching all-time highs of more than $4,000 back in December, the price is down 70 percent since.

However, Bitcoin Cash’s market capitalization has still seen it remain as a top five cryptocurrency and the bigger block-sized coin has seen growth in adoption by major crypto exchanges and other supporters. BitPay and OpenBazaar are two of the major companies to commit to the Bitcoin Cash infrastructure. So could we just be in the stage of early adoption?

Larger institutions such as Microsoft still signal their support for Bitcoin, with the tech giant only supporting the original B itcoin protocol for their online store. A blog post from Microsoft’s Identity Division (which is working on blockchain based identities) from January states that block size increases hamper the decentralized nature of the network and cannot reach the transaction volume output needed at a worldwide scale. They support off-chain methods of boosting transaction output (such as Lightning Network).

Bitcoin Cash only has around 10 percent of the transaction numbers of bitcoin, but average transaction fees have never wandered above $1. Note that it took many years for Bitcoin transaction fees to reach such a level, so we cannot really regard much from this statistic.

Bitcoin Cash sees itself as a closer representation of Satoshi Nakomoto’s original whitepaper for a “peer-to-peer electronic cash”. Bitcoin arguably has not reached this status yet either, so it is still a race to see which becomes the undisputed holder to Satoshi’s throne.