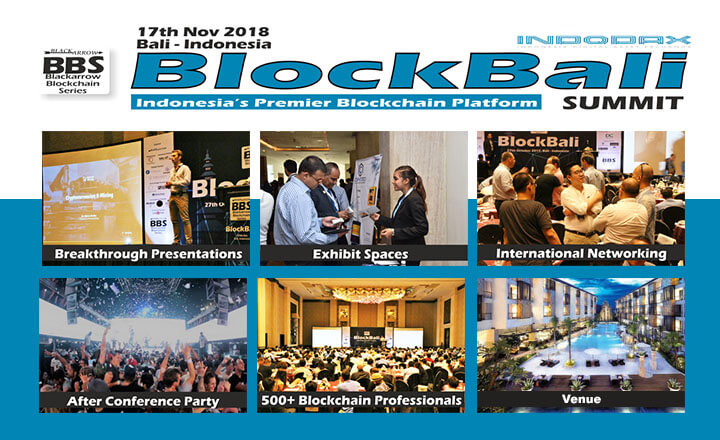 Blockchain professionals from all around the world will head to Indonesia for the BlockBali Blockchain conference on November 17, 2018 in Bali.

Bali the paradise island is set to welcome blockchain professionals from all over the world to Blackarrow’s & Indodax’s BLOCKBALI Blockchain conference scheduled for the 17th of November 2018 at the luxurious The Trans Resort Bali. Last years Blockbali conference was a sold-out conference with 300+ participants, a mix of 33 nationalities from 24 countries. The conference was well attended by the blockchain community of Indonesia and nearby ASEAN countries plus a huge entourage of international blockchain experts from various countries. And this 2nd edition of Blockbali is planned for 500+ participants from all over the world.

Indonesia’s senior government agency has recently signed a decree approving crypto as a commodity for trading and hence there is a positive buzz in the market and the future looks extremely prospective, read about it in the news. Senior Government officials and blockchain companies have already confirmed their participation at BLOCKBALI 2018; and these senior government officials will shed light on the government’s outlook on blockchain and cryptocurrency. BLOCKBALI 2018 is the 8th edition of Blackarrow’s Blockchain Series and is poised to be the biggest edition ever with over 500 delegates. So don’t miss out on the chance to meet, network and position your brand at Indonesia’s Premier Blockchain Event for Business.

Some of the confirmed speakers include:

This year Blackarrow is all set to replicate its debut success again in Bali in November this year. This time the event will aim to connect the global blockchain gurus and technology players with Indonesian business leaders. It will discuss the opportunities in blockchain & cryptocurrencies in Indonesia & also lay the foundation for Indonesia becoming ASEAN biggest blockchain market.