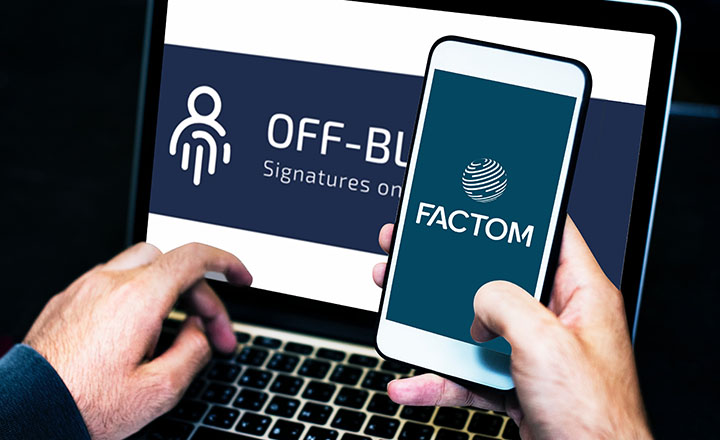 Off-Blocks—a new digital signature app for smartphones—was teased earlier through a video, suggesting a release on the Factom ecosystem early next year.

A new and exciting application of blockchain technology might be coming early next year through the distributed digital ledger Factom.

An online user with the handle BobbyEK shared on Factom’s Discord channel and subreddit a video teasing a new blockchain-based mobile app called Off-Blocks. This app, according to the video, would be the user’s digital signature on a blockchain.

If you thought #factom was just a one-trick pony, you were wrong! This is just a taste of some of the exciting stuff being built right now. https://t.co/WhTTX257z3

The video briefly explained that Off-Blocks would utilize the benefits blockchain technology brings to help users to sign off practically anything, from digital images to documents, using only the app. In a blockchain, a network of nodes can easily verify the validity of digital signatures and transactions involved.

The teaser added that Off-Blocks can also be used in network governance, decision-making processes, copyright protection, rewards, and more. The mobile app, BobbyEK revealed would come to the blockchain-based platform Factom as early as January 2019.

Meanwhile, Factom is a platform built on top of the Bitcoin blockchain wherein data of any kind can be stored on a decentralized and distributed ledger accessible by anyone. According to Factom, this capability is most helpful in keeping mortgage-related information, Internet of Things (IoT) data, and healthcare records, among others.

Apart from the Off-Blocks announcement, there have been positive developments recently that Factom supporters should celebrate.

Holders of Factoids (FCT), the cryptocurrency used on the Factom ecosystem, can now store their digital tokens on the crypto hardware wallet Ledger Nano S through the MyFactomWallet website. Factoids are used, among others, as payment for storing data on the Factom platform.

At the same time, FCT prices have experienced a significant increase in the past few days. As of November 19, FCT was trading at US$8.49 against the US dollar, 33 percent higher than yesterday’s price of US$6.02. The current value was also a huge improvement from the past weeks, with 93 and 106 percent increases in just a week and a month, respectively.