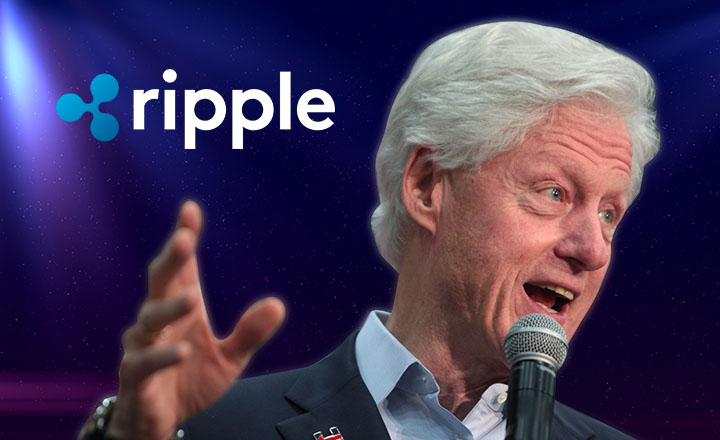 Former United States President Bill Clinton was announced as the featured speaker of Ripple-hosted Swell, a crypto and blockchain conference in California.

Ripple announced that a former United States president will be the keynote speaker for its annual cryptocurrency conference.

Bill Clinton—the 42nd US president—is set to headline Swell, a crypto and blockchain conference hosted by the altcoin’s developers on October 1 and 2, 2018 in California.

Clinton will address the attendees and will participate in the following question-and-answer forum to be hosted by Gene Sperling, once the National Economic Council Director and National Economic Advisor during the Clinton administration. The former commander-in-chief has been involved in crypto, most famously after receiving a physical Bitcoin from venture capitalist Matthew Roszak.

Ripple, in a press release, said:

“At a time when groundbreaking technology and regulation were often on a collision course. President Clinton helped usher in a period of extreme growth and adoption of the Internet, shaping what it is today. He also established programs that bridged the ‘digital divide’ and brought new technology to undeserved communities around the world.“

Many credits the Clinton administration as the leading figure in promoting innovation and in discouraging monopoly in the telecommunications and internet industries.

According to Ev Ehrlich, former undersecretary of Commerce in the Clinton administration, the signing of the Telecommunications Act kick-started the rise of the internet. The Act, he said, opened the telecommunications market to huge private investors in anticipation of a looming “information superhighway” in the future.

“So the 1996 Act drew a line… the emerging new world of ‘information services’ would be allowed to develop on its own free from utility-style requirements such as government oversight of prices, forced sharing of infrastructure with competitors, or rigid management rules. As a result, we have seen over US$1.2 trillion in investment since the 1996 Act, and the innovation, growth, and new services the Act’s framers imagined.”

In its press release, Ripple likened the position of the internet in 1996 to the current state of cryptos and blockchain technology today. The company expressed its hope that today’s regulators will take inspiration from the Acts passed throughout the country’s history, especially the Telecommunications Act which imposed policies that did not harm innovation.

The blockchain and crypto revolutions serve as the main topics for this year’s Swell, hosted by Ripple. Clinton and Sperling will join Ripple CEO Brad Garlinghosue and other leading experts on the fields of policy, payments, and technology as conference speakers. Attendees can participate in activities and sessions tackling the utility of blockchain technology and other related issues.

The two-day conference will be held in San Fransisco, home to Ripple’s headquarters. While the complete speaking line-up is yet to be released, participants can expect to take home valuable knowledge from once the most powerful man in the world.