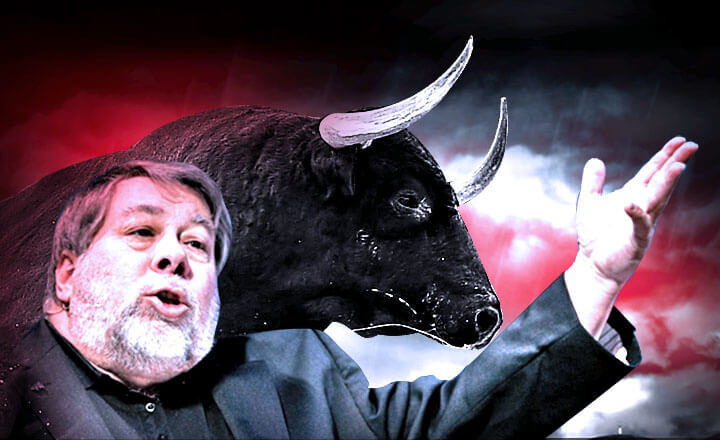 Apple co-founder and famous Bitcoin bull Steve Wozniak believes that the field of blockchain technology is starting to exhibit signs of an economic bubble.

Blockchain—not Bitcoin—is the bubble, according to Apple co-founder Steve Wozniak. The Woz, as he is more affectionately known, shared his thoughts about the rising technology at the NEX technology conference in New York. The hype over blockchain, he observed, was similar to the dot-com era in the United States.

“[Dot-com] was a bubble, and I feel that way over blockchain.”

The dot-com era was one of the biggest economic bubbles in the recent times. Back when the internet was still young in the late 1990s, venture capitalists and investors flooded the market, pumping money into dot-com companies. Most of these companies failed their promises, therefore crashing the market.

The Woz was quick to remind the audience that many blockchain startups have appeared, but only a few can survive in the end.

“If you look now you say all that internet stuff happened, we hot it, it just took a while. It doesn’t change in a day, a lot of the blockchain ideas that are really good by coming out early they can burn themselves out by not being prepared to be stable in the long run.”

However, even though he believes the market is pushing the technology into becoming a bubble, Wozniak does not see anything wrong with the blockchain itself. In fact, he likes it. In a different panel held earlier this month, he said that banks resort to blockchain-related solutions because of the security and traceability of this decentralized public ledger technology.

Wozniak is well known for his bullish look on Bitcoin, the biggest digital currency on the market based on market capitalization. He believes that the first cryptocurrency to have ever existed is purest among all other cryptocurrencies. The Woz has been quoted before that other cryptos born from Bitcoin’s ideas have to give up an important aspect—he gave total decentralization as an example—in order to create a profitable business model.

“Bitcoin is mathematically defined, there is a certain quantity of Bitcoin, there’s a way it’s distributed… and it’s pure and there’s no human running, there’s no company running and it’s just… growing and growing… and surviving, that to me says something that is natural and nature is more important than all our human conventions. “

The 67-year old philanthropist also hopes that Bitcoin will become a global single currency. He even admitted that his interests lie within the crypto coin’s utility and not its value. This admission was reinforced by his confession that he sold all but one of his bitcoins.

Bitcoin continues to drop down in valuation as the crypto world loses total market cap week after week. As of June 28, Bitcoin is valued at US$6,135.17, far away from the digital coin’s peak value at US$19,000 just six months ago.